In 2014, I wanted to work on a project that explored experiences, physical feelings, organisational decisions, and rhythmic models that emerge from an integration of barefoot running and drumming. I was introduced to barefoot running by Sydney-based guitarist Carl Dewhurst in 2012 and the experience transformed my life. Up until then, I’d been running a lot, and getting injured a lot, but could never understand why. After running barefoot with Carl, I had a kind of physical epiphany and knew that this would be a central experience in my life from then on. (I highly recommend checking out Carl’s music, here’s a link to his Bandcamp page)

After a couple of years of barefoot running I realised that the practice was shaping my thoughts about various aspects of life, and it seemed appropriate to try and be shaped musically by the experience as well. As a starting point, I tried to collate thoughts about what seemed to be primary aspects of running barefoot as I’d experienced it so far. For me, a major learning experience was that every step is slightly different than the previous step in duration and feeling (as the ground is different at every spot). Barefoot running is not an even rhythm but an ongoing collection of slightly uneven durations that have a general feeling that is ongoing but not completely regular.

So in response to this question, I decided to make a recording where every beat would be slightly different to its neighbour, and set about generating a process that would allow this to happen. Also, barefoot running is minimal…shirt, shorts, hat, sunglasses…that’s it. There’s no gear, it’s very limited in terms of peripheral stuff. This thought led to a restriction of instrumentation…so bass, bass drum, brushes, bells. It seemed that this could be a nice way to generate a rhythmic landscape within which trumpeter Phil Slater could improvise (there’s also a piece on the recording that features Carl Dewhurst but it was based on different materials to the stuff included here).

I’m sharing this, and the Coiling page stuff, as, when I was younger, I didn’t know that one could make things in rhythm without a stylistic starting point or reference. I had no idea that process could generate materials in rhythm that could then be used in improvisation. Also, being here in Australia, its interesting to ask how this experience, in this place, doing things like running around barefoot, can be a catalyst for music.

The process that allowed this music to emerge has its origin in a piece of music by Australian trumpeter Scott Tinkler. The piece is called Positively Glowing, and it has a melody that contains a range of quintuplet rhythmic groupings. Scott recorded this piece with his trio (which I was very fortunate to be apart of, along with bassist Adam Armstrong) back in 1997, but, at that time, I really didn’t have an understanding of quintuplets or how they could be manipulated in improvisation.

In the mid-2000s, a few years after recording Positively Glowing with Scott, I decided to go back to that piece and really try to understand the groupings and possibilities contained in the melody. I created a set of rhythmic studies, one in quintuplets, one in septuplets, and a triplet version, that laid out a range of groupings within each subdivision. 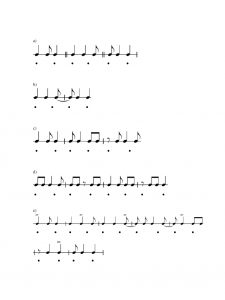 I spent a long time exploring these pages as a space to understand rhythm, to explore stickings in different subdivisions, and as a space to try all sorts of coordination exercises. I also tried to make music that was improvised yet contained only materials from these pages.

So this piece, called Tokoroa, contains only materials from the quintuplet and septuplet page performed as an improvisation. The idea is to explore each line from the pages as unique events that are linked but can be played at any speed to create different types of tension and release..

Later, after being deeply inspired by J Dilla, I used the quintuplet and septuplet phrases as a kind of pool of options to create rhythm melodies with my left hand whilst playing different forms of long-short (a quintuplet version, and a septuplet version) as a back beat with my right hand. This was a really fun experiment and I learnt a lot about phasing between subdivisions from it. Here’s a track that came out of that period of practice:

The other guiding thought for this track track was “why do rappers get to have so much fun with rhythm?”. I love the rhythmic shapes that rappers like Common create, and I was imagining creating rhythmic lines that twist through subdivisions and interact with the back beat in different ways.

The experience of playing a back beat that phases between quintuplets and septuplets led to an idea that shaped On Running.

So running is not like a beat or cycle in that it is not repetitive. It’s a long contour but no step repeats, as every step has its own unique duration and experience underfoot. It’s also very meditative. Adding these thoughts to the pot of ideas, along with experiences from the J Dilla inspired experiment, led to an idea of very simple rhythmic events, just long-short, but performed in a way where no long-short figure is the same as its neighbour.

When rapidly phasing between eighth notes, triplets, 16ths, quintuplets, septuplets, and nonuplets every beat, I found it really hard to be accurate or to maintain a sense of subdivision (this is just my experience, others may not have a problem with it) especially when trying to maintain the effect for long periods at a time.

So I came up with a set of rhythmic archetypes in each subdivision that I would sing in order to ensure more consistency of placement. In table below, you can see the archetype to be sung, and the accompanying dot which is the note I want to play. I found this model to be extremely helpful as, instead of trying to calculate and place a single note within ever shifting subdivision, I could sing the archetypes, and practice shifting rapidly between the different subdivisions, and the note that I play would be a kind of sub-level…an emergent property of what I was singing but not the primary focus. So the primary focus was singing the archetype, and I would then play one or two notes from that archetypal shape.

Here’s a table that shows the subdivision (left column), grouping, archetype (third column from left, that I would sing), and the final column that shows the relationship between notes to be played (dots) and archetype (If there’s dots and archetype I’ll just call the dots/archetype combination an “event”). [in the grouping column I made a mistake in the triplet…just ignore it ha ha). 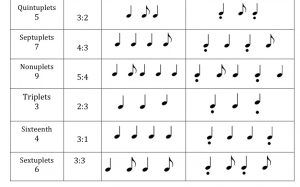 I practiced this stuff by singing archetypes and playing the dots on the bass and bass drum in unison. I found this practice to highly addictive and spent many months exploring different ways of phasing between this set of materials.

This playlist shows just how different each “event” sounds when compared to its neighbour. For these experiments, I sung the archetype and played the accompany dots along to a pre-recorded snare drum. The tracks are listed in terms of subdivision. Track 9, Denardo, is an improvisation that moves randomly between subdivisions. Track 7 is an example of singing whilst playing the dots (expressed as a back beat). Track 8 is the quintuplet page played through once.

After spending time developing awareness of each subdivision and a fluency when phasing between different subdivision “events” and archetypes, I developed a few pieces for On Running out of new practice areas.

Some of the practice ways included:

Improvising between subdivisions but sticking to a plan of archetype-archetype-archetype-event (sing-sing-sing-sing/play) so, sticking with one subdivision for 4 beats then shift to another subdivision for the next four beats.. This was fun as it produces huge spaces in the music, with these simple but ever-changing rhythmic events that occur sporadically. I found that operating in this way, and changing the archetype after each event, led to really interesting and ambiguous shapes. The only rule with this one is that each event must be a different subdivision to its neighbours.

Just a note about notation. Throughout this project I never used notation, I would just sing the different archetypes and improvise the order. I guess its a kind of super constrained improvisation that has only 6 options to move between.

I also tried shifting between subdivisions/archetypes every beat…so event-event-event-ect. This is really fun but took a lot of time to be able to shift confidently between these things. I recorded this track and it must have been funny for the engineer listening to me singing all these crazy rhythms whilst just playing 1/8 notes (that sounded slightly longer or shorter than each other). This track has a pre-recorded tom tom backbeat, and I played bass drum and bass in unison as an overdub. I found this rapid subdivision shifting to be a very fun thing to spend time doing.

This project was a great experience in trying to actively link barefoot running and drumming through the creation of a process. I found that just initiating this led to running/drumming being linked in all sorts of other ways as well (I get into this a bit in the Coiling page), and it allowed for musical decisions to be made outside of influence or style. Also, it was so fun! I loved putting the metronome on 30bpm and considering the “tock” as the backbeats. I would then spend time just improvising between the subdivision events using voice (archetype) along with bass and bass drum (dots)…..so fun!

This experience also gave me a different understanding of composition. That “composition” could be the result of constrained improvisations. An example is Tokoroa, which is an improvisation that only uses materials from those subdivision studies. In all recordings offered here there was a lot of preparation involving developing an understanding of the materials, but the final results are improvisations in all cases. It really helped me grasp the idea that a personal expressive space can be generated by only using materials created through personal process, and that they can just be played as is, without the need to fit them into an existing context, song form, or style.